Pray Away The Crime

Do the crime, do the time? Not always. The town of Bay Minette, Alabama has a new way of dealing with criminals: go to jail or go to church. This seems innoucous, but I see it as another step toward theocracy. Bay Minette is worried about the cost of jailing criminals. Putting people in jail is expensive (the reported average inmate cost was $79 per day, or nearly $29,000 per year in 2009) but that is what legal reform addresses. More than half of people in jail are non-violent offenders, mostly from drug charges. Adopt a sane policy for drug use -- not Ron Paul's; though, come to think of it, why not?-- and, voila, your prison population drops.


But it is a dangerous precedent to use churches as an alternative to jails, and is probably unconstitutional. Bay Minette says it is constitutional because the offender is allowed to choose which church to attend.


Bay Minette has no synagogues, no mosques, no mormon temples, but if you are christian criminal (no offense to mormons, but most christians don't consider the Church of Latter Day Saints to be christian), you have many choices. Not just Southern Baptist, no, there are Roman Catholic, Lutheran, Episcopal, and other Protestant churches to choose.

Got another email from the Gov today and he continued his Rick Perry-like spew of lies:

The Louisiana Workforce Commission announced just this week that for 11 straight months our state has added private sector jobs. Our unemployment rate also fell for the 3rd consecutive month and continues to be well below the national and Southern averages.


Now this is a lie by omission, so many may not think it a lie, but look at this graph: 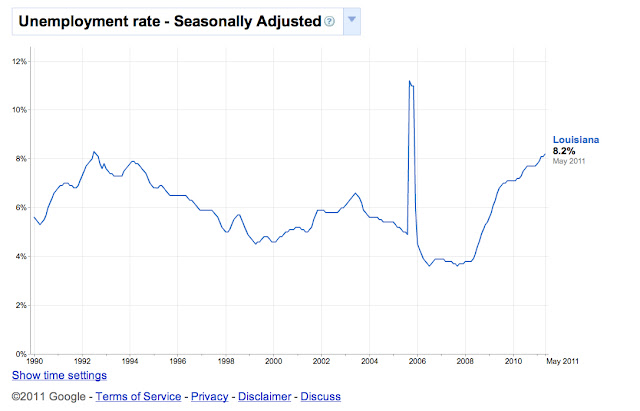 I readily acknowledge that big spike at the end of 2005 was due to the devastation of the Federal Flood, and that huge dip in unemployment during 2006 to 2008 was due, god forbid, to the infusion of Federal money to rebuild New Orleans and points south.


The point here is that our job growth has declined since 2008 and, 6 years later, is approaching the record high of the disaster of the Federal Flood of 2005.


This is a record that Bobby wants to brag about?

John Fleming is a raving idiot, but that is the main qualification for membership in the Tea Party, and he amply proved himself an idiot on MSNBC this week. He spends $200,000 a year to feed his family? Really? The guy owns 55 Subway shops--they sell $5 foot long food things.
I know he dislikes Elizabeth Warren and you have to have a modicum of intelligence to enjoy Stephen Colbert. I especially liked Colbert's graph in the middle of this:
The Colbert Report
Get More: Colbert Report Full Episodes,Political Humor & Satire Blog,Video Archive
Posted by frog at 14:58 No comments:

The 40 hour work week, minimum wage, paid vacation, healthcare, lunch breaks, all won by Unions before WWll. Since then all of these gains have been under attack by the indolent wealth of our country. Louisiana is a "Right to Work" state, which is a scam to benefit employers. "Right to Work gives workers the right to die and nothing more.
This video is from the Untied Steel Workers but it applies to every Union and every worker.
Watch it:
Posted by frog at 12:12 No comments:

I got a letter from Rep Steve Scalise today, maybe you did too. Here is an excerpt:
"As you may know, the House of Representatives recently passed a measure that would raise the debt ceiling. While this legislation included some reductions in federal spending, the cuts were simply not enough to get my vote for the final bill. Unfortunately this debt ceiling deal did not do enough to reverse the reckless Washington spending spree that has been accelerated by President Obama. The President has implemented an extreme tax, spend, and borrow agenda that has crippled our economy, and now, under President Obama’s watch, caused the U.S. to have our credit rating downgraded for the first time in American history."
You must know that the President cannot raise taxes, nor can he cut taxes--only the Congress (specifically the House) can do that. Taxes have decreased under the current Administration to the lowest level in more than 50 years. As for the debt ceiling, that is paying for money already spent by Congress, by Scalise and his colleagues!

And the downgrading of our credit rating was entirely the fault of the House threatening to default on debt payments.
I can forgive the Congressman's equating a family's need to balance their budget with that of the US government because economics are hard to understand. But surely he has a staffer who studied the subject and knows that the Federal Budget does not now nor has it ever functioned like a family's budget. That same staffer knows that nearly every family above the poverty level carries a huge amount of debt and most could not get by without the ability to spend what they do not have. Just think of mortgages, car loans, and credit cards.
It is time to be honest with the American people.
Posted by frog at 21:48 No comments:

Why does Vitter tell such obvious lies?

A new email for Diaper Dave:


All too often we hear about radical environmentalist groups attacking Louisiana’s energy industry and threatening our jobs and economy. That’s why last year I requested a full audit by the Government Accountability Office (GAO) to find out just how much taxpayer money was being spent to fund lawsuits by these radical environmentalist groups who sue the federal government.
Turns out it’s a lot – tens of millions. GAO finally completed the report I requested and it shows that taxpayers have been on the hook for years while ‘Big Green’ trial lawyers have raked in millions of dollars suing the government.
Even worse, because of sloppy record keeping by federal agencies such as the Environmental Protection Agency (EPA) and a lack of cooperation by the U.S. Justice Department, we're not even sure how bad the problem really is. This is unacceptable and I'm going to continue working to demand greater transparency.
One particularly absurd example is the Natural Resources Defense Council, an environmental group actively litigating against oil and gas exploration. This is the group who’s currently trying to shut down the entire Gulf of Mexico from offshore drilling. In 2008, the NRDC received $3.5 million from taxpayers, even as it pursued litigation that would imperil the jobs of tens of thousands of energy industry employees in Louisiana alone.
Additionally, between 2003 and 2010, the Treasury Department paid out approximately $14.2 million from its “Judgment Fund” to environmental plaintiffs who had filed suit against EPA.
(Read more about this issue in a recent article from the Washington Examiner here.)
Allowing hard earned tax dollars to be carelessly paid out to these environmentalist groups is a threat to our ever increasing deficit, and it’s a threat to Louisiana’s economy. This report is a good start to helping expose this.
Sincerely,

So Dave makes it look like the "radical environmentalists" are being paid by Obama to destroy the economy of Louisiana. He fails to mention that the "'Big Green' trial lawyers" who have "raked in millions of dollars suing the Federal government" have been paid that money because they won their cases and the courts ordered, in some cases, the Feds to pay lawyer and court costs. This is legal and a very common practice.
He also makes the Treasury Dept seem careless in its paying of $14.2 million to environmental plaintiffs from its ""Judgment Fund"", as though the "Judgment Fund" is some bogus fund. The "Judgment Fund" is exactly that, the Judgment Fund, it is a fund created by  31 U.S.C. 1304 to pay legal costs when a government entity loses a court suit. Those "Big Green trial Lawyers" won their cases and the court order the Judgment Fund to pay them
If you click on the link  report  in Vitter's email, it will take you to his website, not to the GAO report which is here. No, you go his website and read more of the same sniveling lies that were in his email. There is a link to the report at the bottom of the page, but how many people will bother to click on it after they have read what he tells them it says? But if you actually read the GAO Report, you will find that he cherry picked the data, and that the report says just the opposite of what he tells us it says.
For instance:
Justice defended approximately 2,500 EPA-related cases filed from fiscal year 1995 through fiscal year 2010, but the number of environmental litigation cases from which plaintiffs received payments was small, representing about 8 percent of all cases (page 22 of the GOA Report).
It is notable that Vitter links to a piece in the Washington Examiner, a free daily paper in the D.C. area that is a Conservative rag that has a mottled history of questionable business practices.  The piece is an opinion column by Ron Arnold, man who has waged a life long war against Environmentalists.
Also, shutting down offshore drilling is not a bad thing--California and Florida banned it--but it would be bad for Vitter. He makes hundreds of thousands of dollars from Big Oil.

SO the question remains: Why does David Vitter tell such obvious lies?
Posted by frog at 18:59 No comments: