"When it comes to weird and slippery, Weiner’s got nothing on Vitter 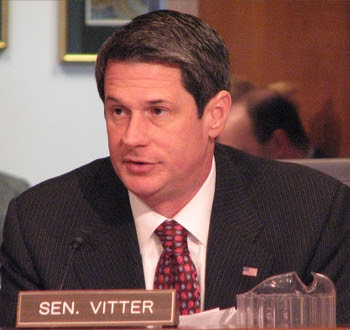 The senator is seemingly invulnerable to his sex scandals.
James Gill of The Times-Picayune is probably the region’s most talented political columnist, yet he’s not immune from the occasional howler. Consider this excerpt from his Sunday column:

A strong case could be made that [Sen. David] Vitter is neither so weird nor so slippery as [Rep. Anthony] Weiner, who, when questioned about pictures of bulging underpants distributed on his Twitter account, lied through his teeth for several days until he was finally forced to come clean.

Fates preserve us! If lying about tumescent tweets for a week is the benchmark for “weird and slippery,” how can Gill possibly discount Vitter? Our junior U.S. senator is the king of weird slipperiness, if not slippery weirdness. Vitter lied through his teeth for nearly a decade about his chronic and illegal whore-chasing, yet neither the local media, nor fellow Republicans, nor Louisiana voters ever forced him to come clean. He’s still in office. Let’s see Weiner pull that off! I invite anyone to make “a strong case” for Vitter over Weiner. Please make that case, right here, I beg you. No, I double dog dare ya."

The problem is that he deleted Gill's next sentence. If he had printed it, the sarcasm would have been drippingly obvious. To wit:

"A strong case could be made that Vitter is neither so weird nor so slippery as Weiner, who, when questioned about pictures of bulging underpants distributed on his Twitter account, lied through his teeth for several days until he was finally forced to come clean.
Climbing in the sack with hookers seems positively conventional by comparison."

This sort of editing bothers me because Mark Moseley misquoted James Gill by deletion so he could attack David Vitter. David V is very easy to attack and there is no need to abuse James Gill to do it.

So, Mark, I would say that the howler is yours, not James Gill's.
Posted by frog at 21:12 No comments:

Remember that little old lady who sued McDonald's for getting burned by their coffee? McDonald's spun the story to make the case seem a frivolous suit. But the real story is quite different.

When a business requires its employees to do things that endanger the employees or the customers, it is in violation of the law and of its moral responsibility to the community. Maintaining coffee at a temperature of 190°F is a danger to those who handle it and tthose who buy it--and it destroys the flavor of the coffee.

I would remind you that McDonald's has been the leader of keeping the minimum wage below a living wage standard. Read Fast Food Nation.
Posted by frog at 23:43 No comments:

I wrote about Nagin's book in the middle of May, speculating that it would be a Vanity Press publication. I was right about that, but I had no idea what a treasure trove of humor it would provide.

The first real clue came Monday night when Ray appeared on the Daily Show with John Stewart. Ray said he self-published because he knew that if he turned the book over to a publishing house he would loose control of his work and they would twist and change it.
Ray surely knows that is not how it works; an author maintains control of his work through out the publishing process--if the author doesn't like the changes suggested by his editor, he is free to go elsewhere.

I am sure Ray tried to hawk his book to agents and publishers and they all turned him down. I, mean, Michele Bachman can publish, Bill O'Reilly can, even Sarah Palin can find a publisher. Was Ray's book so bad that no one wanted to touch it? Perhaps, but as I said, even Sarah Palin gets published; of course, she is the darling of the Tea Party and Fox Noise so her commercial appeal is far larger than Ray can ever dream of.

It is too bad, really, for Ray's book is begging for an editor--at least a fact checker. Instead he has given us a book of fantasy, in which he rewrites his and our history of the days following the Federal Flood of New Orleans. It is a very poorly written book full of grammatical and syntactical errors. But there is a glimmer of truth in his writing--he writes about his paranoia in the weeks following the disaster and I am sure he believed every delusion he suffered in those days.
Posted by frog at 22:19 No comments:

I got this email today from Diaper Dave:

Dear Friend,
Last week, President Obama visited a Chrysler plant in Ohio to congratulate himself on his “tough decisions” to extend $60 billion in bailouts to American automakers General Motors and Chrysler.
It’s a pretty outrageous move for the president to claim credit for bailouts that, even according to White House estimates, will result in a loss of at least $14 billion for American taxpayers.
Not only are $14 billion of your tax dollars gone – forever – but the Obama administration gave GM a special deal that will save the company billions of dollars in taxes that GM would have owed if they had gone into regular bankruptcy. Even more outrageously, much of Chrysler’s bailout money was used to pay for gold-plated union pension packages, instead of going to more deserving creditors.
By stepping in and giving special treatment to the failing automakers, the Obama administration sent a message that if a company is large enough, they don’t have to worry about being held responsible for their mistakes.  It’s the same old “too big to fail” mentality that puts taxpayers on the hook for the irresponsible decisions of other out-of-control businesses.
That’s why I opposed the initial automaker bailouts under President Bush and the dramatically increased bailouts under President Obama.  The automaker bailouts are just one example on a long list of wasteful spending that has led America $14.3 trillion into debt.  I’ve fought hard to get the federal government out of the bailout business and will continue fighting to end these dangerous policies that have cost billions upon billions of dollars in taxpayer money.
Sincerely,

It is typical of Vitter to characterize the return of 77% of the Auto Bailout as a loss of $14 billion. He ignores the fact that had GM and Chrysler gone bankrupt, some 2.5 million jobs would have been lost, cutting nearly $100 billion in wages; He also finds it outrageous that some of the bailout for Chrysler went to shore up pension plans, pensions that were part of legal contracts that Chrysler entered into and is obligated to pay. He ignores the fact that the bailout saved the economies of Michigan, Illinois and Ohio.
He is blissfully ignorant of the changes that GM and Chrysler have made; they are now producing smaller, more energy efficient vehicles-- and Chevy's plug-in, the Volt, has been named Car of the Year.
Vitter sees investing $14 billion in our economy as a huge waste of money--no wonder he voted for the Ryan "budget".
Posted by frog at 20:01 No comments: